These week I  have big interests in Media Archaeology. 2 weeks ago, I went to the E-Waste to rent a piece of old media, and finally a picked a Twin Lens Reflex – Rolleiflex . 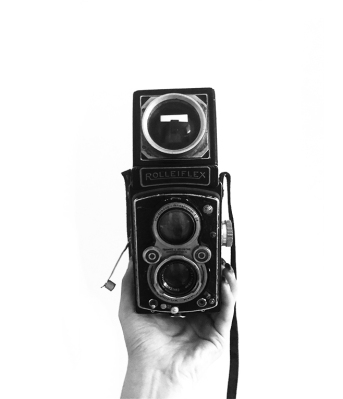 Rolleiflex is the name of a long-running and diverse line of high-end cameras originally made by the German company Franke & Heidecke, and later Rollei-Werk.The “Rolleiflex” name is most commonly used to refer to Rollei’s premier line of medium format twin lens reflex (TLR) cameras. The first Rolleiflex was introduced in 1929 after three years of development, and the Rolleiflex is popular among professional and unprofessional photographers.

However, the heyday of TLR cameras ended long before the era of digital cameras, and now Twin Lens Reflex Camera only used by a few professional photographers or hobbyists. Photographers usually use these camers to take black and white photos.

This portrait photo is by Louis Meluso, a photographer love the TLR camer, Nov 9, 2008.

He photographed this lady in her living room by a big window that looks out over a lake. The light was low so he shot this nearly wide open, hand held. For some reason the finder on this camera is very bright and focusing was easy, even in low light. The bokeh is smooth and buttery.

I enjoyed this photograph and and I also like this solid, well machined manual camera because its a bright finder, whisper quiet shutter and stunning optics.

All TLRs are film cameras, most often using  120 film,  although there are many examples which used 620 film, 127 film, and 35mm film. Film camers has different optics effect than Digital Single Lens Reflex Camera. The flowing photo is taken by my father used Nikon D4S SLR in Jun 21, 2017 at Arhes National Park, Utah, USA:

Media archaeology has been known for its innovative work in excavating repressed, forgotten or past media technologies in order to understand the contemporary technological audiovisual culture in alternative ways. Although some old media is facing to the consequence of obsolescence, there are repurposed by a lot of contemporary artists.